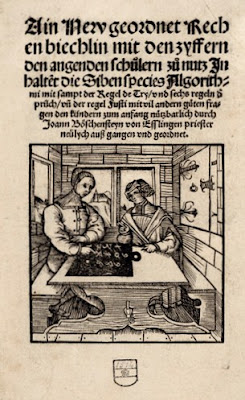 This is the title page of Ain neu geordnet Rechenbiechlin (1514) by Johann Böschenstein (1472-1540). Böschenstein was best known as a professor of Hebrew in several German universities. In fact, Martin Luther studied Hebrew with him at one time. This rechenbuch introduced students to the basic principles of arithmetic, with application to various business problems. The engraving on the title page shows someone working on an arithmetic problem.

Posted by Mathematical Association of America at 12:00 PM No comments: 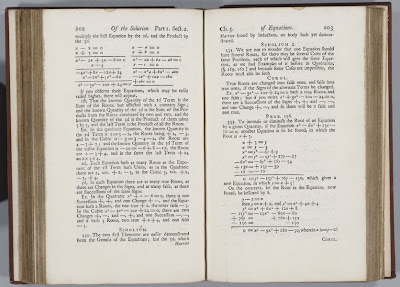 Pages 202-203 (click to enlarge) of Christian Wolff's Treatise of Algebra. On these pages, Wolff discusses some elements of the theory of equations. Note that he mentions Descartes' rule of signs, without attribution to Descartes. In fact, he attributes it to Thomas Harriot and claims further that no one had yet proven it. The first published proof of the result was due to Jean Paul de Gua de Malves (1713 - 1785), who gave two proofs in 1741 in a paper in the Memoires of the Paris Academy.


Wolff was a student of Leibniz and is most famous for his work in philosophy. His school of philosophy, in fact, was the most prominent in Germany prior to Kant. This book was originally written in Latin in 1713. It first appeared in English in 1739, though this copy is of the second edition on 1765. Read more.
Posted by Mathematical Association of America at 12:00 PM No comments: 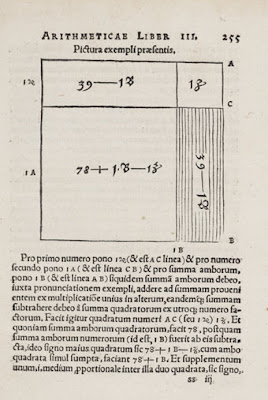 
Michael Stifel (1487-1567), one of the best-known German cossists of the sixteenth century. Stifel's work covered the basics of algebra, using the German symbols for powers of the unknown and also considering negative exponents for one of the first times in a European book. He also presented the Pascal triangle as a tool for finding roots of numbers and was one of the first to present one combined form of the algorithm for solving quadratic equations.
Posted by Mathematical Association of America at 12:00 PM No comments:

A New Treatise of Algebra by Richard Sault (d. 1702).  Not much is known about Sault, except that he ran a mathematical school in London in the 1690s near the Royal Exchange and was an editor of and contributor to the Athenian Mercury, a literary journal that was published between 1690 and 1697.  TheTreatise of Algebra was published as an appendix to William Leybourne's Pleasure with Profit, and included a chapter by Joseph Raphson on converging series. 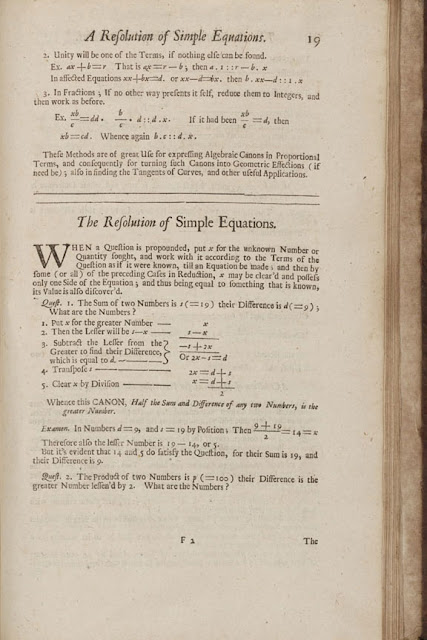 This image is page 19. Notice that Sault describes in some detail, with an example, how to convert a word problem into algebraic notation. Note that he generalizes his problem by using arbitrary constants, instead of just the given numbers.

Posted by Mathematical Association of America at 12:00 PM 1 comment: