151:  The square of the pillar is divided by the distance between the snake and its hole; the result is subtracted from the distance between the snake and its hole.  The place of meeting of the snake and the peacock is separated from the hole by a number of hastas equal to half that difference.
152:  There is a hole at the foot of a pillar nine hastas high, and a pet peacock standing on top of it.  Seeing a snake returning to the hole at a distance from the pillar equal to three times its height, the peacock descends upon it slantwise.  Say quickly, at how many hastas from the hole does the meeting of their two paths occur? (It is assumed here that the speed of the peacock and the snake are equal.)

These verses and much else from the Lilavati may be found in Kim Plofker, "Mathematics in India", in Victor Katz, ed., The Mathematics of Egypt, Mesopotamia, China, India, and Islam: A Sourcebook   (Princeton:  Princeton University Press, 2007), pp. 385-514.

Posted by Mathematical Association of America at 12:00 PM No comments:

These pages are from the 1552 edition of the Practica d'Arithmetica of Francesco Ghaligai (d. 1536). On these pages, Ghaligai proposes a new notation for powers of the unknown. Notice on the left hand page that his notation for the second power (censo) is just a square, but the other notations never caught on with other authors. On the right hand page, Ghaligai illustrates the notation by calculating the powers of 2 up to the fifteenth power.

Practica d'Arithmetica was originally published in 1521, but this printing, like several other printings, is identical with the original. Its intended audience was merchants, so there are many practical problems dealing with issues of trade.  In the sections on algebra, Ghaligai introduces his own notation.

Posted by Mathematical Association of America at 10:00 AM No comments:

Nest of Austrian weights of the 18th century. Selected by D.E.Smith for his collection to illustrate the ancient, “Problem of Weights”. One example of this problem is given by Claude Bachet as:
What is the least number of weights that can be used on a scale pan to weigh any integral number of pounds from 1 to 40 inclusive, if the weights can be placed in either of the scale pans?
This particular set of weights is elaborately decorated and is one of the best specimens of the weight maker’s art of the period. It bears at least ten official seals, one of which contains the date 1787.


Austran weights
Posted by Mathematical Association of America at 9:00 AM No comments: 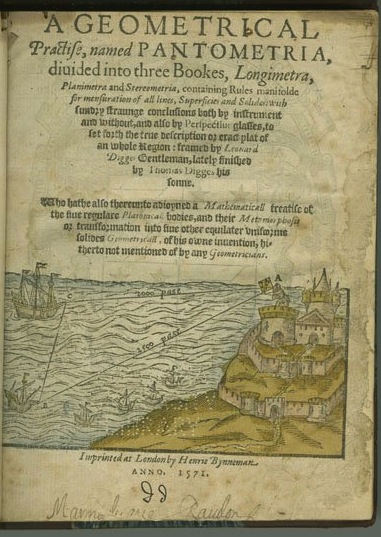 This is the title page of A Geometrical Practise Named Pantometria, a guide to applied geometry published by Thomas Digges (1546-1595) in 1571. Pantometria was completed by Thomas from a manuscript left by his father, Leonard Digges, who died when Thomas was 13 years old. After his father's death, Thomas became the ward of John Dee (1527-1609), sometime scientific advisor to Queen Elizabeth I. Thomas was greatly influenced by Dee, and remained friends with him throughout his life. Thomas Digges became a recognized astronomer and the leader of the English Copernicans.

See more pages from Thomas Digges' Pantometria
Posted by Mathematical Association of America at 8:00 AM No comments: