One of two illustrations from the fourteenth century Italian codex,  Antichissimo di Algorismo. This is one of many algorisms written at this time. They were arithmetics designed to introduce the Hindu-Arabic numerals, their operational algorithms and demonstrate their use in problem solving. The majority of the problems considered in this codex are commercial in nature. A few might be categorized as “recreational problems”. A special feature of this codex is that it contains 42 illustrations, many of which supplement problems. 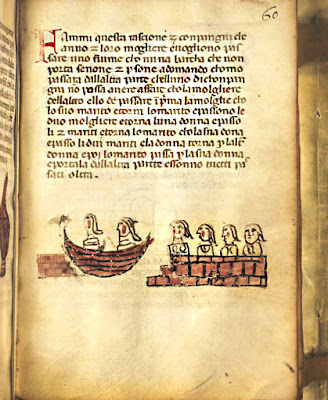 The illustration on folio 60 presents the situation where three couples wish to cross a stream. The small boat they have will only accommodate two persons at a time. How can they all get to the other shore if no man is to cross with another’s wife? This is a variation of the  puzzle-type “River Crossing Problem” that has been posed over the centuries in many guises.


Antichissimo di Algorismo
Posted by Mathematical Association of America at 12:00 PM No comments: 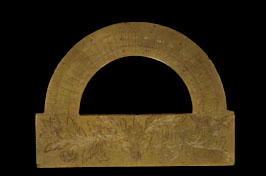 Brass protractor from about 1700 of German manufacture. Its base plate contains some Baroque decoration. Note its similarity to a present day student protractor.


German protractor
Posted by Mathematical Association of America at 12:00 PM No comments: 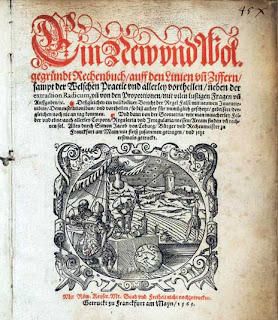 This is the title page of the "New and Fully Revised" Rechenbuch of Simon Jacob (d. 1564), one of the best-known Rechenmeisters of the sixteenth century.  The book was first published in 1560, but this illustration is from the 1565 edition.


Simon Jacob's Rechenbuch
Posted by Mathematical Association of America at 12:00 PM No comments: 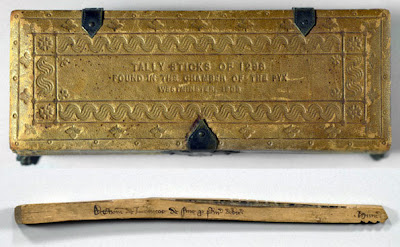 Notched pieces of wood or bone were used by many ancient peoples to record numbers. The most common type of these “tally sticks” was made of wood. Tally sticks served as records or receipts for financial transactions such as the payment of taxes, debts and fines. From the 12th century onward tally sticks were officially employed by the Exchequer of England to collect the King’s taxes. Local sheriffs were given the task of actually collecting the taxes. The depth and series of notches on these sticks represented the value of the transaction. In recording a debt, wooden sticks were often split horizontally into two parts: the lender receiving one part, the stock; and the debtor, the other part, the foil. This box contains sticks that date from the year 1296 and were found in the Chapel of the Pyx, Westminster Abbey in 1808. England abolished the use of tally sticks in  1826.The accumulation of tally sticks in the Office of the Exchequer were burned in 1834 resulting in a fire that destroyed the Parliament Building.

English tally sticks
Posted by Mathematical Association of America at 12:00 PM No comments:

This set of late 19th century sangi, wooden computing rods, originated in Korea. They are contained in their cloth carrying case. Sangi were also used in Japan up until about 1700. These computing rods or sticks, and their resulting numeration system, were originally derived from suanzi, rods used in China from ancient times through the Yuan Dynasty (1271-1368). The Chinese rods were replaced by the suanpan, or bead abacus, which was then adapted with variations throughout Asia.


Korean Sangi rods
Posted by Mathematical Association of America at 10:00 AM No comments: